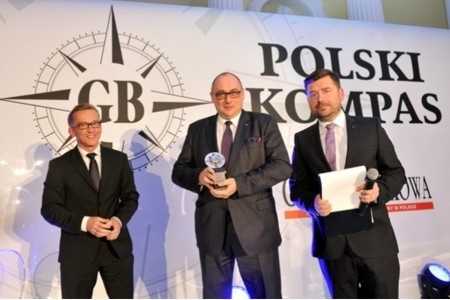 12.10.2015
Paweł Jarczewski among the winners of the ‘Polski Kompas 2015’ award
Paweł Jarczewski, President of the Grupa Azoty Management Board, was distinguished by Gazeta Bankowa, Poland’s oldest economic magazine.

“Polski Kompas 2015 was granted in recognition of effective management of one of the largest projects in the history of the Polish economy,” said Wojciech Surmacz, editor-in-chief of Gazeta Bankowa, explaining the reasons for the award.

Polski Kompas 2015 awards were presented on October 7th 2015 during an official gala held at the Primate’s Palace in Warsaw. The winners of this prestigious accolade also included Andrzej Klesyk, CEO of PZU, and Prof. Eugeniusz Gatnar, member of the Management Board of the National Bank of Poland. “I am more than happy to receive this award from you, because I have been an avid reader of Gazeta Bankowa for a long time. It is the first economic magazine I came to read regularly,” said Paweł Jarczewski, President of Grupa Azoty. Paweł Jarczewski also stressed that the receipt of the award would not have been possible without the contribution of the Group employees. “Today, Grupa Azoty stands for companies in Poland, Germany and Senegal, with 14 thousand staff members. It is their daily effort that builds the Company’s success,” added Mr Jarczewski. The name Polski Kompas (Poland’s Compass) refers to the title of the joint-stock companies annual issued by the owner of Gazeta Bankowa from 1922 to the outbreak of World War II. The award has been reactivated by Fratria, the publisher of the Gazeta Bankowa monthly, W sieci weekly, and popular portals: wpolityce.pl and wgospodarce.pl.