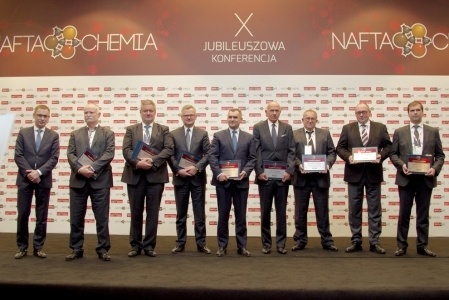 The awards in a poll organised by the Polish Association for Business Development (Polskie Towarzystwo Wspierania Przedsiębiorczości) were presented on December 10th 2014 during the 10th ‘Petroleum/Chemical 2014’ (Nafta/Chemia 2014) conference in Warsaw.

“I would like to thank all those who have built the Polish chemical industry, those who have managed it through crises, and those who have taken it public,” said Mr Jarczewski, CEO of Grupa Azoty S.A., when accepting the award. “Today Police is a market leader and a major player which drives the development of the entire Group,” said Mr Jałosiński, CEO of Grupa Azoty Zakłady Chemiczne Police S.A., which also received the ‘People of the Decade’ award.  The conference, in its 10th edition, was devoted to topics of key importance for the development of the Polish chemical and petroleum industries. “The increasingly stronger position of the Polish chemical and petroleum companies is highly regarded on the European market. The consolidation processes have helped us to improve corporate culture and take our businesses beyond Poland’s borders. We are expansionary and we are building our investment and acquisition capacities. The consolidated Grupa Azoty Group can serve as an example here,” said Włodzimierz Karpiński, Minister of State Treasury, when opening the 10th ‘Petroleum/Chemical 2014’ conference. The consolidation of the Polish chemical industry was repeatedly cited by the conference participants as a milestone in the development of the Polish manufacturing. During panel discussion entitled ‘Chemical industry in Poland – an attempt to sum up – development vision’, Mr Jarczewski, CEO of Grupa Azoty S.A. emphasised that “the Polish fertilizer industry is facing today a great challenge: to guarantee food security for Poland and Europe.”  The debate ‘Products, costs, margins – what are the priorities of the chemical industry?’ was attended by three Grupa Azoty representatives: Witold Szczypiński, Vice-President of the Management Board and Director General of Grupa Azoty S.A., Adam Leszkiewicz, President of the Management Board of Grupa Azoty Zakłady Azotowe Kędzierzyn S.A., and Zenon Pokojski, Vice-President of the Management Board of Grupa Azoty Zakłady Azotowe Puławy S.A.  “Fertilizers account for approximately 60% of total revenue of the Grupa Azoty Group. Polish manufacturers must continue their cost-cutting efforts and operational improvement, but they will never be able to make up for the huge differential in gas prices. Therefore, we must enhance our fertilizer product portfolio and add value without expanding the production capacities,” said Mr Szczypiński. Zenon Pokojski, Vice-President of Grupa Azoty Puławy stressed, “The growth potential of the country’s fertilizer sector depends on Polish exports of agricultural and food products, which today stand at EUR 20bn.”