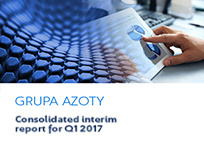 “Compared with the first quarter of 2016, the first quarter of 2017 was good for the Group for several reasons: revenue grew by over PLN 200m, EBITDA margin, although lower by about 4% on the same period of 2016, was evenly attributable to the Group’s three main business segments, averaging 16%−17% in each of them. We are particularly happy to record a clear improvement in the profitability of the Plastics segment, especially taking into consideration the project to increase polyamide production capacity, which is currently nearing completion in Tarnów,” says Paweł Łapiński, Vice President of the Management Board of Grupa Azoty, responsible for finance. Rapid changes on the market in the first quarter of 2017 were reflected in the Grupa Azoty Group’s financial performance. Key drivers of the Grupa Azoty Group’s performance included:

Year-on-year increases in operating profit (EBIT) of the Plastics (up over 600%) and Chemicals (up 14%) segments were not sufficient to offset a deterioration in the Fertilizers segment, which ultimately resulted in the Grupa Azoty Group’s consolidated EBITDA and consolidated net profit lower (by ca. 13% and ca. 22%, respectively) than in Q1 2016.

In the Plastics segment, the Grupa Azoty Group recorded a 48% growth in revenue (q/q), taking full advantage of polyamide and caprolactam price increases (up 30% and 40%, respectively). Having maximised production, it recorded an increase in polyamide and caprolactam sales volume by approximately three thousand tonnes year on year, in the period of an all-time high (Delta) margin related to raw material cost. In conclusion: very good conditions in the automotive, clothing and film manufacturing segments, with simultaneous limitations of caprolactam production in China, contributed to a year-on-year increase in the Plastics segment’s EBITDA by as much as 608%.

In the Chemicals segment, the Grupa Azoty Group posted a 21% growth in revenue (q/q), benefiting from favourable price trends for pigments and OXO products, while increasing volumes for melamine and technical-grade urea. Sales of pigments (titanium white) went up by around 27%, with prices growing by approximately 11% (q/q). Increased volumes in the melamine and urea business, with prices practically unchanged, enabled margins to be maximised by reallocation of nitrogen (urea) from the fertilizers business, where prices were falling. All factors taken into account, the Grupa Azoty Group recorded a 14% rise in the Chemicals segment’s EBITDA relative to Q1 2016.

In Q1 2017, the Fertilizers segment of the Grupa Azoty Group saw a 3% decline in revenue and 35% fall in EBITDA (q/q), driven by high natural gas prices and downward pressure on fertilizer prices, which global manufacturers were forced to reduce in response to farmers’ declining purchasing power.

The first three months of 2017 were a period of continued work on large investment projects covered by Grupa Azoty’s “Growth Strategy”.

“Thanks to Grupa Azoty’s stable financial position, we can afford flexible approach to our strategy, while constantly working to improve our competitiveness in the coming years. Our goal is an integrated Grupa Azoty, enhancing the attractiveness of its product portfolio, using optimised processes and implementing innovative solutions. With our updated “Growth Strategy”, we are sending a clear message to stakeholders that Grupa Azoty is able to flexibly adapt to the changing business environment,”says dr Wojciech Wardacki, Grupa Azoty CEO. “In the financial area, the updated strategy provides for adjustments to corporate performance indicators. The revised indicators will provide an adequate benchmark against which progress in the implementation and delivery of our strategic objectives will be measured. With the execution of ambitious investment projects in mind, which would support Grupa Azoty’s business growth and ensure the highest level of long-term financial security, the Company decided not to set a lower limit for the dividend payout ratio, and to maintain the upper limit at 60%. Our ambition is to maintain dividend payout close to the upper limit, while ensuring financial security and consistent implementation of other elements of our strategy,” adds Grupa Azoty CEO.

In Q1 2017, Grupa Azoty spent PLN 219m of its total 2017 capex budget of PLN 1.3bn. In 2017, these capex amounts were spent on the construction of a new CHP plant and upgrade of the synthesis gas compression unit in Kędzierzyn-Koźle, as well as a production unit for granulated fertilizers and upgrade of the nitric acid production facility in Puławy.

One of the greatest long-term challenges in creating Grupa Azoty’s competitive advantage will be the construction of a propane dehydrogenation (PDH) unit in Police. Completion of the project would mark Grupa Azoty’s entry in a new segment of petrochemicals. Based on the performed analyses, the Company expects the project to yield attractive rates of return. Also, a group of third parties interested in the investment project was identified.

One of the key development projects currently analysed by Grupa Azoty is the project to obtain synthesis gas. Coal gasification for chemical production is a widely employed technology, with synthesis gas obtained from coal used as feedstock for around 30% of the world’s methanol production. For Grupa Azoty, the coal gasification project would offer prospects for advancing its business in an innovative technology area.

“The project would have a wide-reaching and positive impact on the entire economy. Based on globally proven technology, we aim to extend our value chain and switch a significant part of production to local syngas over the next couple of years,” says dr Wojciech Wardacki, Grupa Azoty CEO.

Grupa Azoty’s “Growth Strategy” is based around four focus areas which, in addition to reinforcing the Group’s leading position as a supplier of agricultural solutions in Europe, include:

Grupa Azoty is Poland’s largest chemical group, formed through consolidation of chemical plants in Tarnów, Puławy, Police, and Kędzierzyn-Koźle. Grupa Azoty is the second largest producer of artificial fertilizers in the European Union and a major manufacturer of chemicals.